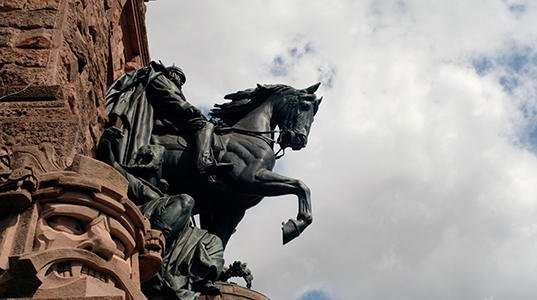 The Documentation Center Thuringia (DZT) is dedicated to researching radical political movements in Thuringia that glorify oppression and violence. Founded by artist Erik Niedling and writer Ingo Niermann, the DZT examines both what was and what is, as well as what could be. Unlike documentation centers dedicated to Nazi history, the DZT does not confine itself to surveying particularly catastrophic past events, but understands the pursuit of oppression and violence, as manifested in National Socialism and its underlying racism, sexism, ableism, and totalitarianism, as something always undergoing transformation. In order to resist it successfully, the DZT strives to apprehend not only its existing forms but also its potential future mutations.
In this sense Ingo Niermann’s 25-part video series Deutsch Süd-Ost (2020), produced for Steirischer Herbst, is a Who’s Who of prominent „last white men”—representatives of the New Right, Reichsbürger, controversial artists and intellectuals—who segregate themselves in an alternative present in the depopulated south of Thuringia, where, inspired by their new sociotope, they develop maverick trends in music, fashion, sex, nutrition, eugenics, terrorism, and tourism. Deutsch Süd-Ost is a tragicomic mental laboratory that playfully processes and transforms right-wing ideas.
In the DZT’s  exhibitions – Dokumentationszentrum Thüringen (2022) and Summer of Anarchy (2022) – Erik Niedling explores the question of how Thuringia became a rallying point for right-wing radicals and neo-Nazis after the fall of the Wall, and chronicles how, in order to violently oppose them and the annexation of the socialist Eastern Germany by the capitalist Western Germany, he and his friends founded the „Anarchist Faction“ as  teenagers. Niedling gathers archival material and historical artifacts and presents his personal story as a fragment in world events. A present-day encounter between Niedling and an old comrade-in-arms, who today belongs to the QAnon movement, gives a glimpse into an ominous future.
The Thuringia Documentation Center sees itself as a complement to the Burial of the White Man, which Niedling and Niermann anticipate annually on May 8, the day of Germany’s defeat in World War II, on Thuringia’s Kleiner Gleichberg. Here, the largest pyramid in the world is one day to be cut out of the mountain and subsequently disappear under it again, symbolically burying the archetype of the White Man, which bears a particular responsibility for oppression and violence.
Download exhibition brochure 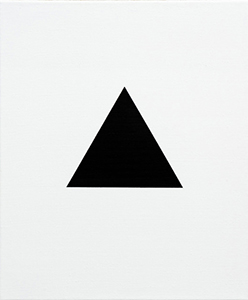 In Lychen, sitting in the middle of the overgrown garden, I sipped sparkling apple juice while pondering the idea of creating Pyramid Mountain with a gigantic explosion. Two butterflies landed on my knee. I tried to sit still so as not to disturb them. After a while they beat their wings and flew to a red tulip. (Excerpt from Burial of the White Man, Sternberg Press, Berlin, 2019) 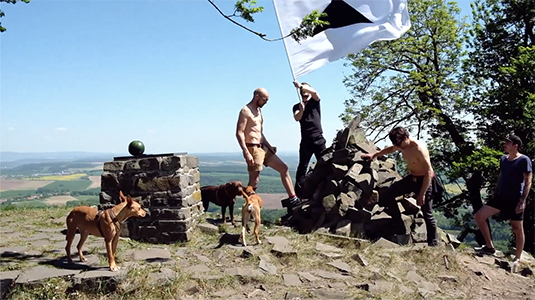 A public diary not only captures experiences, it often encourages you to make your life more successful. Just as millions of people today document their lives more or less realistically in social networks to create an optimized version of themselves, Niedling shows his attempts to advance Pyramid Mountain’s realization in a regular video diary as a way of spurring himself on and exploring the framework conditions through conversations and actions with sympathizers, critics, and experts. 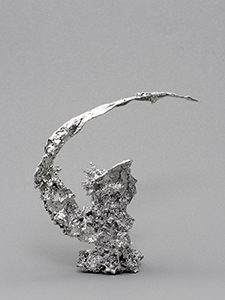 Molybdomancy is still practiced today in German-speaking countries and commonly known as Bleigießen (lead-pouring) respectively Zinngießen (tin-leading). It is a popular pastime, especially during New Year’s Eve celebrations to predict one’s upcoming year. Small lead or tin figurines are melted over a candle and, once liquified, poured into cold water. The transformed and resolidified shape is then interpreted for clues to an uncertain future.For his sculpture series, Niedling replicates the process of Molybdomancy, but enlarges its scale over a hundredfold. Instead of a single figurine, Niedling liquifies whole armies of tin soldiers, pours them into water and receives a quite dramatic object. 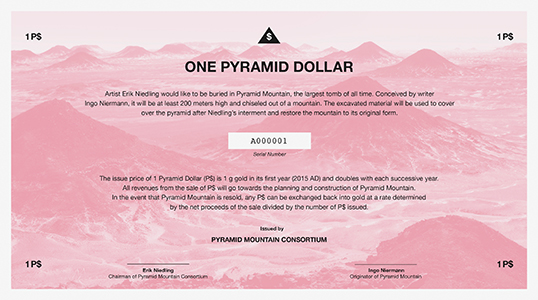 The launch of the Pyramid Dollar (P$) marks the first time that shares in a single artwork, Pyramid Mountain, are being issued. This work, which was conceived by Ingo Niermann in 2010 and subsequently transferred to Erik Niedling, is a concept for the largest burial site and pyramid of all time: a pyramid, chiseled from a mountain and at least 200 meters high, within which Niedling will be interred, after which the pyramid is itself buried under the excavated material and the mountain restored to its original shape. The issue price of the Pyramid Dollar doubles each successive year. In the first year (2015 AD) it is 1 P$ for 1 g gold, in the second (2016 AD) 1 P$ for 2 g gold, in the third (2017 AD) 1 P$ for 4 g gold, etc. 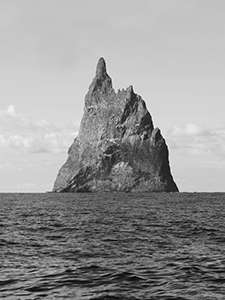 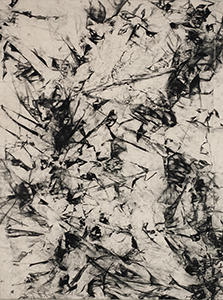 In his series of the Pyramid Paintings, Niedling uses the soot of discarded and destroyed paintings as colorants for abstract gestural notations. Only when he has perfected his work on the Pyramid Paintings to the point that they unvaryingly satisfy him over a long sequence will the series find completion. After Niedling captured the soot of his scrapped works on glass plates in his Teilchen (2012) series, he now rubs it onto canvases in his Pyramid Paintings, creating a link to an imaging technology that harks all the way back to cave paintings. Niedling’s painting is a pause in the face of the oversized challenge of making the Pyramid Mountain a reality. The alternation of creation and destruction recalls the cycles of life, and the completion of the series resembles death in perfection. 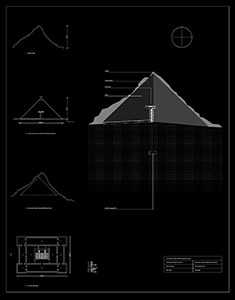 List of works to be transferred to my burial chamber after my death. This is to be realized within Pyramid Mountain, conceived by Ingo Niermann—a pyramid at least 200 meters high carved from a natural mountain that will be reburied under the excavated material after my internment, restoring it to its original mountain shape. Pyramid Mountain not just buries a single human being and their treasures, it rather buries an entire epoch — of the white men – shaped by the cruel pursuit of symbolic immortality.

– Four vases from my family’s supply.

– Creamer that belonged to my grandparents.

– Two Matchbox cars from the Intershop in Oberhof.

– GDR bottle openers showing marks I made in 1983.

– Wooden cat that stood in my childhood bedroom for as long as I can remember.

– Photograph (b/w), 1979: my parents with me at the parish fair in Bindersleben.

– Wooden pistol, 1979: carved by my father, with my fingerprint where I picked it up before the paint dried.

– White die that has always accompanied me.

– Shell, acquired through a trade in elementary school.

– “Honor Dagger” from the German Wehrmacht.

– Paintbrush crafted from a bullet casing.

– Butcher knife that belonged to my grandfather.

– Piece of pottery from the Temple of Karnak (Egypt).

– Two Indian arrowheads made of flint.

– Flint arrowhead from the Stone Age.

– Amber pendant that belonged to my grandmother, which I wore for years after her death in 1988.

– Heart-shaped aluminum locket that belonged to my grandmother, contains a photograph (b/w) of my grandfather.

– Travel thermometer made of ivory.

– School notebook started by my parents, contains evaluations of my school conduct, 1985.

– Photograph (b/w), 1988: group portrait with Markus Bruszis, Andreas Horvath, and me, taken in a photography studio.

– Reichsbahn card forged by my girlfriend at the time, where I gave my name as Vincent Strauß.

– Gutting knife in a leather sheath.

– Certificate for my participation in a children’s painting contest held in India, undated (ca. 1987).

– Contract with my father regarding conditions of use of his leather jacket, with an additional clause concerning the length of my hair, 1989.

– Poster for a demonstration against Chancellor Helmut Kohl, 1990.

– Sticker for an antifascist strike.

– Photograph (color, with red filter): me and Christian Zahn after a ride in the countryside.

– Swatch watch with a skewed face.

– X-ray photograph, 1992: the broken bone that left me bedridden for several weeks, when I began taking photographs.

– Sketchbook, 1997–99, with a photograph of my slashed and blooddrenched undershirt from a knife attack in 1997.

– Article in the Thüringer Allgemeine on the founding of my project

space foto.raum in Erfurt and my search for like-minded people in the area, 1999.

– Key chain in the form of a violet billiard ball.

– Flier for Puck, a techno club in Erfurt.

– Admission ticket for a Bodycount concert at the Weimarhalle, 1993.

– Erfurt city magazine Boulevard 8 (1998) with an ad I designed for the Erfurt skate shop Orange Jungle: four photographs (b/w) and an excerpt from the novel American Psycho by Bret Easton Ellis.

– Invitation card for my exhibition “Mein Kampf. Dein Kampf” (My Struggle. Your Struggle) at foto.raum, a Leipzig project space opened for this project, 1999.

– Zippo lighter that I shot several times with an air pistol.

– Passport photo, 1999: me with my mouth and shirt smeared with fake blood.

– Photograph of an installation in the “Mein Kampf. Dein Kampf” exhibition, foto.raum, Leipzig, 1999.

– Teapot my friends and I used to pass around LSD and Hawaiian Baby Woodrose on Christmas Eve 1998, at my shared flat at Theaterstra e 6, Erfurt.

– Headless, matte-black plaster sculpture I bought when I was in elementary school and later partially gilded and plated with silver.

– Poinsettia made of white paper.

– Cinzano bottle, like the one Christoph L schau had smashed over his head.

– Blank pistol, like the one fired to end the first part of the nocturnal disputes.

– Booklet 3Y1ST for the third anniversary of 1st Decade Records, 2003.

– Flier I designed for a party for the Neo.Pop compilation series, 2001.

– Notice of receipt for my “1st Decade Records” wordmark registration at the German Patent and Trademark Office, 2002.

– Old tin box from the Niedling stationer’s shop in Erfurt.

– Erik Niedling and Jens Thiel, National Three A, newspaper with a text by Ingo Niermann (Erfurt, 2003).

– Forged nail that I found in 2005 while working on my Status photo series at the Angermuseum.

– Ingo Niermann, Minusvisionen: Unternehmer ohne Geld, protocols (Frankfurt am Main, 2003), in which Jens Thiel says, “Meanwhile [Erik] has been hanging at all the German art fairs, but I think

it’s going to go international this year and with a little luck, our thing will be pulled along with the undertow.”

– Ingo Niermann, Umbauland: Zehn deutsche Visionen, essay (Frankfurt am Main, 2006), with one of the first descriptions of the idea of the Great Pyramid, a collective tomb for potentially every human being in the world.

Room 7: The Future of Art

– Wooden pyramids from Visoko, Bosnia, where, according to Semir Osmanagic, the largest pyramid in the world is concealed under a mountain.

– Purchase contract for the works in the Chamber cycle, 2011.

– AEG Traveller de Luxe typewriter, like the one used by Ernst Jünger.

– Bread baked on a hot rock during a hike through the woods with Ingo Niermann, 2011.

– Rock from the steps of the Reichsparteitagsgelände (Nazi PartyRally Grounds) in Nuremberg.

– Iron from the battlefield in Verdun.

who participated in the events on the night of December 24, 1998.

sound, recorded during a reunion of all those who were friends on

the night of December 24, 1998, and participated in the transpiring

events. The speaker and punching bag were located at the place the

*A steel rod I compressed at both ends and rubbed with goat’s milk,

the upper end of which is struck by a green laser beam. The first

from a newspaper. The picture shows a Harley Davidson motorcycle

that I won as a prize at a carnival in 1986. The print has accompanied

me ever since and continues to fade more and more with each passing day.

*Construction plan for the Pyramid Mountain concept, which I

acquired from Ingo Niermann, along with my burial chamber.

*Transcription of Ingo Niermann’s interview with me about my life.

*My last large-format photograph, taken on a supposedly ancient

*Glass panes coated with soot from burning assorted parts of my

*Receptacle for preserving my corpse in Pyramid Mountain. 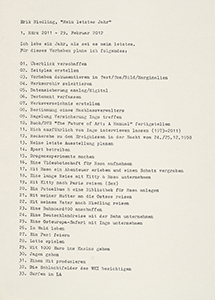 Average life expectancy can fool you into thinking you still have many years ahead. But what would it be like if you had only one left? What would you want to—what could you—experience in this limited period of time? Erik Niedling lived one year—from March 1, 2011 to February 29, 2012—as though it were his last. 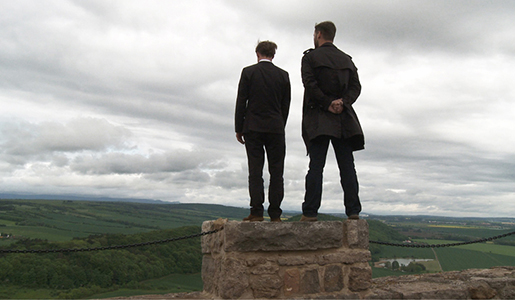